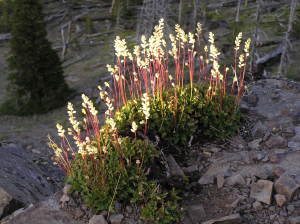 I want to tell you about the first wonderful, mind-blowing surprise I experienced while beginning to accept Dr. Sarno’s understanding about my chronic foot pain. This surprise was my first pleasure walk in three years!

I had been camping by a canyon rim in Eastern Oregon, and I had been longing to sit on a particularly inviting rock with a better view, to have a cup of tea. But I didn’t want to hurt, and since each step hurt, I took no steps toward that rock for several days.

Then late one afternoon I summoned my courage and with a steaming cup of tea in my hands, I moved toward the rock. It was about 75 feet from my camper. As I took those first steps I experienced a little trepidation (that first step didn’t hurt, but how about the second?!). Slowly, a sort of magical exhilaration came over me as my feet felt fine. I was enjoying walking!

In awe, I made my way through sage and rocks, to sit in the snow flurries on the edge of my little canyon. Each step was pain-free and each step felt like a soft, loving miracle. Yes, it was that good.

With the help of Ken Malloy, a Life Coach from New York City on my cell phone, I had just finished inquiring into my doubts about how Dr. Sarno’s understanding about pain could apply to me.

I had many doubts. How can all these doctors who recommend operating on my foot be wrong about the cause of my pain? Wasn’t the tarsal nerve dying? On the other hand, I thought, if I had TMS, how can I be “doing this to me?” How could I be so dense and confused to be suffering a horrible “mind-body syndrome?” After many years of doing inner work, how undeveloped is that!

Starting with Ken on the phone I knew I wanted to work on my doubts. I had learned from my teacher Radha Conrad that pushing through doubts doesn’t feel real to me. It is not as effective as inquiring into them, allowing them to have their say. So this is what I did on the phone. Ken mostly listened while I explored. I felt supported.

Sometimes I can’t let in new ideas because my reaction to my Inner Critic keeps me defending a position of some kind. As I explored my doubts, it turned out I was under attack by the Inner Critic —and I was reacting to the attacks in ways that kept me holding onto self images that made me feel I was right.

The first attack was a voice that said if I had TMS, “You have done this to yourself.” OK, that’s the attack. Then I became aware that a child part of me was arguing with the Inner Critic, “Of course I have not done this to myself. I don’t have TMS!”

Seeing this dynamic, I realized the child part of me was arguing and justifying to cover up a deep fear: “I might be doing this to myself!” (Of course this phrasing is loaded and blaming, and is not an accurate understanding of TMS.)

Wow. That would be hard to let in. If I was “Doing this to myself,” this opened me to all kinds of things that blew my self-image: I would be unaware, stupid, self-deluding. Also, could I ever stop “doing this to myself?” So I wasn’t letting the possibility in. My engagement with the Inner Critic was not allowing new information in.

Investigating this, I defended my right to make mistakes, to be confused, to be human. This is possible when I see the attack for what it is, and don’t unconsciously engage at a parent-child level. A tenderness arose in me, as the Inner Critic attacks lost power. I could see the many ways that I wanted to hold onto being right in my life. To be “enough.” I felt tears and compassion for myself, always struggling to be enough, all the way back to being a young child with my mother. I felt the hurt of not being seen, and more softness arose in my heart.

With this relaxation around my ideas of who I took myself to be (the Right One!), I could see that I indeed could have TMS. It was possible. I could very well be suffering TMS, like 10’s of thousands of others. In fact, it was probably true.

Having seen through the Inner Critic dynamics, the fact I might have TMS didn’t make me a wrong person any more. It just made me human. The whole dynamic of self attacks, arguing, and fear relaxed into an openness to possibilities, and an attunement to myself. I felt a desire to be with myself and know myself better.

This self attunement was only possible by feeling the pain of my struggle to be seen as good and worthy. Compassion is is a feeling quality, not a thinking quality, and it is only by feeling more, that I open to compassion.

To accept TMS as the cause of our pain is the most important element in applying Dr. Sarno’s cure, because the symptoms maintain their “reality” by our beliefs that there are “physical causes.” So this hour on the phone was huge for me.

The other thing that I recall before that little (BIG) walk was feeling Ken Malloy’s compassion for me, and honesty about what his TMS triggers were. Ken found he could release his pain by allowing himself to feel a very deep sadness. During our session, I felt seen and supported by a vulnerable human being who had cured himself of pain. This made Dr. Sarno’s information all the more real for me.

When I express the truth of Dr. Sarno’s understanding of pain to people I meet, the usual response is disbelief. I wonder how many of these dismissals are caused by our society’s limited understanding of the real causes of pain. Or, like for me, how much of the rejection of Dr. Sarno’s ideas is also a result of Inner Critic dynamics related to who we take ourselves to be. One of the functions of Inner Critic activity is to distract us from deeper feelings. It functions like TMS symptoms in this regard, as a defense mechanism. I think this is an important inquiry for people who are contemplating Dr. Sarno’s work.

Exploring my doubts let me take those first pleasure steps toward my rock. Then the next day I took a few more, and by the next week I walked around the block back home, all with no pain.

If you are new to Dr. Sarno’s work, I hope you take time to explore why you believe his understanding may not apply to your pain, or other symptoms. My inquiry allowed the doubts to dissolve for me, and I was on my way.